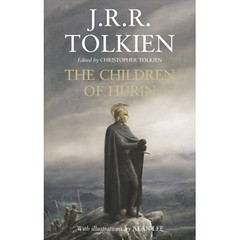 J.R.R. Tolkien The master's last words Apr 19th 2007 From The Economist print edition THIS week J.R.R. Tolkien reaches us from beyond the grave. Three decades after his death, his son, Christopher Tolkien, has compiled “The Children of Hurin”, gathering his material from subplots in three of Tolkien's books (including “The Silmarillion” which was also published posthumously) plus notes that the great man jotted down throughout his career. All the standard fare is here. There is a Dark Lord, a doomed hero and a dragon. Turin and Nienor, Lord Hurin's children, are born at a time when Men and Elves in Middle Earth are united against Morgoth (a deity gone bad). Hurin is captured in battle and through his defiance of the Dark Lord is cursed and forced to witness the downfall of his family. The story centres on Turin's inescapable misfortunes as fate drives him to disaster, together with his mother and sister. This story, based as always on ancient European mythology, is told without poetry, let alone comedy. As the exhaustive introduction and preface make clear, it is all unadorned tragedy. Though the book is quite short, the detail and description are dense. Plot is almost an aside since Turin is destined for awful things from the outset. But the language is authentically Tolkien's. Devoted fans of Tolkien's books, and of the film trilogy made from “The Lord of the Rings”, queued for this final volume when it appeared in the shops this week. They will, no doubt, rejoice in a fresh perspective on a well-known chronicle. But those uneducated in Middle Earth's rich history and languages may find themselves restlessly page-flipping between the main story and the family trees, glossaries and appendices. “The Children of Hurin”, unlike Tolkien's better-known stories, does not set out to be a vehicle for his political and philosophical ideals. Its aim is to tell a good story, and it does so, without wandering into its wider implications. It is well crafted: Christopher Tolkien has skilfully pieced the fragments together to form a “continuous narrative without gaps or interruptions”. The question is whether, given the vast extent of Tolkien's published work, this new spinning of fragments was really necessary.