( dun laugh at me, i am not really good at this)

China’s economy is expanding fast, but its militay expanding is going faster.

Robert Captlin, who teaches at the US Navy Acedemy , says it is going to change the balance of power in Asia.

And that’s got the Pentagon worried while the White House is upset with the war on terror. US Defence Secrect Donald Ramsfield says that China spends a lot on arms secretly. He believes it is now the world’s biggest military spender after US and Russia. Robert Captlin again.

” The Chinses defence budget has been growing in double digits relative to the total economy for years now. That in all of itself shows dramatic rises in defence spending that are not across the board are extremly well-targeted by not just diesel but nuclear power, submarines, make investements in missile technology that can hit moving targets it sees”.

“It’s better for you to shut up and keep quiet. it’s much much better .”

Rebus language from one of China’s most senior diplomats Sha Zukang, China ambassor to the UN in Geneva. In a far from inscrutable interview for the BBC, he said he is tired of lectures on defence spending, expecially lectures from Washington.

“What I want to tell you is that are you the number one? Is it true that you have almost 50% of the world’s military budget? And China’s population is six times or five times that of the United States. Why blame China? No! Forget it. It’s high time to shut up! It’s US sovereign right to do whatever they think good for them. But don’t tell us what is good for China. Thank you very much.”

So, why is China spending so much on its military,particularily, its navy? Analysis’ say the reason is tied up with the central-formed policy preoccupation–Taiwan.

“Taiwan prepares its defences, China’s exercises off the coast have begun.”

10 years ago China launched a huge military excercise in a spat over Taiwanese move towards independence. President Clinton sent two aircraft carriers to warn the Chinese off. Robert Captlin says that incident focused the minds of Chinese military planners, that’s changing the rules of the game for America.

“In Iraq, we’ve seen the low end of ancient method of warfare. The Chinese are about to teach us many lessons in the coming decade in the high end. Remember, the United States’ navy has been used to going completely unchallenged. That is gonna change, because the Chinese are investing heavily in submarines and missile technology that can essentially lock the United States out of the Taiwan straits.”

That won’t mean the Chinese navy could defeat the Americans, but they could constrain them.

“So high price to pay…

“You are right, you are right. You know, I said at any cost. It’s not a matter of how big taiwan is,but for China,one inch of the territory is more valuable than the life of our people.We will never concealed that.” 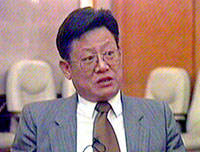